Mayor de Blasio signed Intro 775-A into law in June 2016 that amended the city’s Landmarks Law.  It constitutes a revised version of the original legislation, Intro 775.  For the first time, it imposes strict deadlines on the Landmarks Preservation Commission for completing work on individual and historic district designations.  Under the law, the LPC will have one year from the point of calendaring an individual building and two years for historic districts to approve the designation. If the deadline is not met, the individual building or district must be withdrawn from the LPC’s consideration, effectively giving property owners an opportunity to alter or demolish their structures. The earlier version of the bill would have placed a five-year moratorium on reconsidering an item after a deadline is surpassed, but this provision was removed.  Reconsideration of the item will require the LPC to formally re-calendar it, which would likely be a rare occurrence. 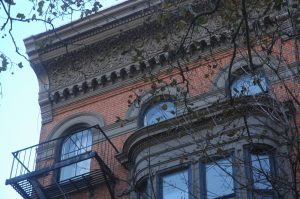 Legislation has been introduced to the City Council, called Intro 775 that would impose fixed deadlines on the Landmarks Preservation Commission (LPC) within which the agency could hold public hearings and schedule votes to designate historic properties. If the commission does not act within this period, the property would be subject to a 5-year moratorium during which it could not reconsider the property for landmark designation.

A Ticking Clock Opposed by the BHA

For individual buildings, the LPC would be required to hold a hearing within 180 days of receiving a Request for Evaluation and schedule the designation vote within an additional 180 days following the hearing.  For historic districts, separate one-year periods would be established for the public hearing and the designation vote.

The legislation’s prime sponsors, David Greenfield (Brooklyn District 44) and Peter Koo (Queens District 20), promote Intro 775 as a means to make the LPC more accountable and to remove prolonged uncertainty from property owners in the absence of these deadlines.  The legislation’s opponents, which include the BHA and many other community organizations and citywide preservation groups, have criticized the measure for providing property owners with the ability to hold up the LPC’s process in order to achieve their goal of altering or demolishing their property.

The Council’s Land use Committee held a day-long hearing on September 9, 2015, at which Meenakshi Srinivasan, the LPC Chair, expressed strong concern about the City Council imposing deadlines and advocated that the agency handle the situation through the LPC’s own internal rule-making.  She expressed confidence that the LPC could meet the bill’s timeframes for individual landmarks but testified that historic districts require more time than what the legislation allots.  The Real Estate Board of New York, which is the voice of the real estate industry, testified in favor of the legislation.  They were greatly outnumbered by opponents, which were uniformly opposed to the 5-year moratorium.  Council Member Greenfield stated that the committee will make changes to the bill before it goes to the full council for a vote.

The BHA’s letter urging continued opposition to Intro 775A by its elected officials can be found here.