Update, February 2020 The MTA has announced plans to move forward with elevator replacement at the Clark Street 2 & 3 subway station in Brooklyn Heights over an eight-month period, allowing for repair of all three elevators simultaneously. Because Clark Street is a deep cavern station accessible only by elevator, the station will close while this work is underway.

Outgoing New York City Transit President Andy Byford said, “This plan reduces the length of construction time at Clark Street to just eight months, and eliminates uncertainty for our customers. We strongly feel our approach minimizes the impact that this disruption will cause.”

The contract for the project will be awarded later this year-meaning construction won’t begin until next year, but the start and end dates for the elevator replacement work will only be announced after the contract is awarded.

The upper level of the station will remain open, preserving public access to businesses located there. The MTA will also take steps to minimize the impact on local businesses. Residents and visitors will need to use nearby stations, including the High Street A & C subway station or the Borough Hall-Court Street 2, 3, 4, 5 & R. From the Clark Street station, these alternative stations can be reached via the B25 bus.

What is the BHA doing?

Many residents and commuters who were surveyed wanted the station to remain open despite a longer repair time-frame, however, we also heard from a number of people who thought full closure was the best option. At this point, it seems the MTA is committed to the full closure – so we’re working with our electeds and the MTA to mitigate the potential negative impacts.

Below are some of the issues we are urging them to consider:

1. Shuttle buses have been ruled out by the Agency due to concerns over the ability to maneuver larger vehicles on our smaller residential streets. The MTA believes the B25 bus, which operates between the High Street station on Cadman Plaza West and Boro Hall, will serve customers who are not able to or do not wish to walk to Boro Hall. The BHA is advocating for increased frequency of service on this line, especially during the evening and overnight hours.

2. Although the station and the businesses inside will remain open during the construction period, the BHA, along with many of you, are concerned about the negative impact a reduction in customers will have on these important local businesses. We have asked the MTA to include the BHA in its outreach and engagement efforts with local businesses so we can help amplify the business owners’ concerns and be a part of developing support strategies.

Making sure these businesses survive the construction period will require the active engagement of the Brooklyn Heights community! We will be in touch soon with plans for how we can collectively show our support and encourage our neighbors to continue to patronize our local merchants.

3. We continue to urge the MTA to use the time before the closure of the Clark Street Station to ensure neighboring subway stations are fully operational. For example, the escalators at High Street cannot be in disrepair as they were last year for a number of months. 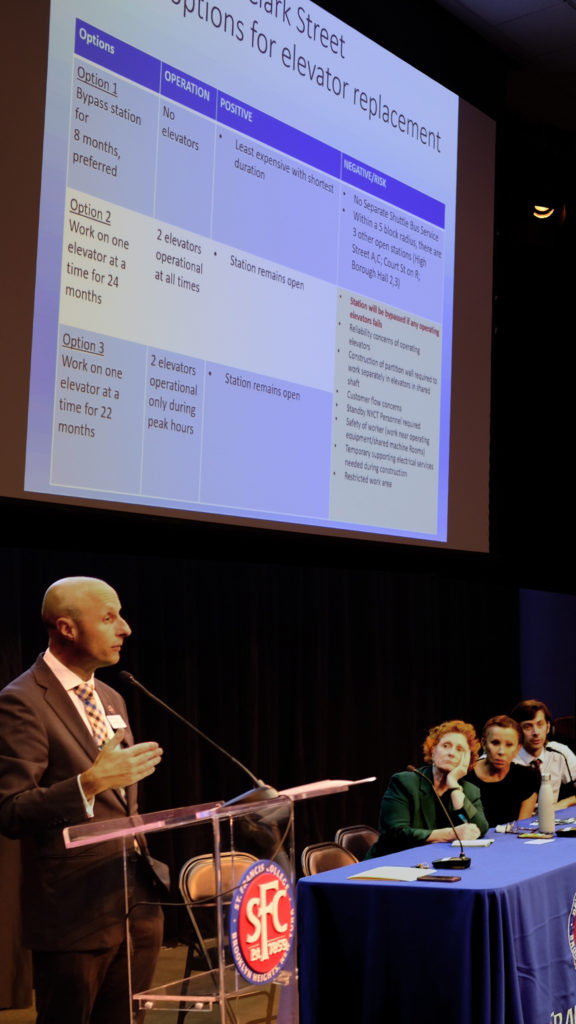 In 2019 riders of the 2/3 line who used the elevators at the Clark Street station were trapped 14 times. The antiquated elevators need a complete overhaul, and the MTA at a Town Hall in September of 2019, three different options under consideration by the MTA for structuring the work were presented to the Brooklyn Heights Community. MTA President Byford repeatedly said that he was interested in hearing from the community and a survey was distributed with the help of the elected officials present.

A summary of the options presented:

Option #1 would mean the subway would bypass the station entirely for a period of 8 months while new elevators were installed. The station itself would remain open and the businesses within the station would be accessible to customers. This is the option preferred by the MTA. According to the agency, it would be the quickest and the least expensive.

Option #2 would involve work on one elevator at a time over the course of 24 months, leaving two in operation at all times. Because of safety rules related to emergencies, two elevators need to be in operation at the same time.

Important to note for Options 2 or 3: trains may be required to skip the station during peak times in emergencies, or if one or more of the operating elevators fail. Given the current elevator failure rate, the MTA estimates this could occur as frequently as one or two times a month.

Option #3 would involve work on one elevator at a time over a 22-month period. Two elevators would be in operations only during peak times, with all trains skipping the station during weekends and off-peak times.
Link to PDF of their slideshow.

A total of 687 responses were collected immediately following the public meeting, in-person at the subway station, and online. Overall, 62% of respondents preferred one-elevator-at-a-time replacement, with either a 22- or 24-month duration, while 38% preferred full closure with an 8-month duration.