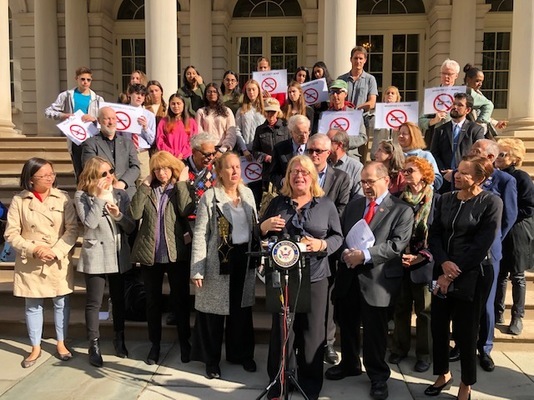 On October 26, 2019, the BHA joined Representatives Carolyn B. Maloney, Jerrold Nadler, Nydia M. Velazquez and other elected officials along with neighborhood and civic groups from across the city on the steps of City Hall to show our support for the Improving Helicopter Safety Act of 2019. This new federal legislation would improve residents’ safety and reduce noise pollution by prohibiting nonessential helicopters from flying within New York City airspace and thus drastically reduce helicopter traffic.

In January 2016 the de Blasio Administration — to the great consternation and outrage of the affected communities — reached a closed-door agreement with the tourist helicopter industry to extend its lease for the Downtown Manhattan Heliport another five years and to eliminate the City’s right to terminate the lease within that period.

While it reduces the number of flights by January 2017 from 60,000 to 30,000 and bans all Sunday tourist flights over Governors Island, it maintains flights at a level that was already the source of widespread community opposition.  StoptheChop, the coalition advocating for the ban on all tourist flights, strenuously objected to the Administration’s lack of consultation with affected communities and their elected officials. It also questioned the industry’s commitment to report truthfully on its operations.

Not to be deterred by the new restrictions, the helicopter industry sought to build a heliport in Yonkers so that it could operate tourist flights outside the bounds of the NYC agreement.  With concerted advocacy by StoptheChop, the BHA, Yonkers residents and others, the Yonkers City Council voted down the proposed heliport in June 2016, thus blocking the industry’s maneuver.  Critics of the industry fear that it will seek an alternate heliport site in Westchester County to evade the new restrictions.

With the closing of the West 30th Street Heliport in 2010, all sightseeing helicopter operations in New York City were moved to the Downtown Manhattan Heliport, directly across the East River from the Promenade.  Since then, helicopter noise has become an increasing and incessant problem for Heights residents, as well as for waterfront communities throughout the city.  Their noise permeates into our parks and homes, diminishing city residents’ ability to work, sleep and enjoy their communities.

The complaints about helicopter noise reflect the tremendous growth of their operations from 10,000 flights annually in 2002 to 60,000 currently, 80% of which serve tourists.  On peak days, 3 to 6 helicopters are in the air at the same time.

The New York City Council Committee on Environmental Protection held a public hearing November 12, 2015, on Intro 858-2015 and 859-2015, two bills that would prohibit Stage 1 and Stage 2 sightseeing helicopters, the loudest and most polluting helicopter types in operation, and ban Stage 3 helicopters subject to approval by the U.S. Secretary of Transportation. The operation of emergency, military, business and news helicopters would not be affected.  At the hearing, NYC Economic Development Corporation officials revealed that the City receives little net income from the lease of the heliport and admitted that EDC had not undertaken an independent study of noise impacts despite years of public protest.