After failing to gain support among the community for the redevelopment of the LICH site that would have likely included affordable housing, a public school, and retail space, but also been considerably larger than what current zoning permits, Fortis announced in November 2016 that it would build the As-Of-Right (AOR) Plan.
Since the AOR Plan complies with existing zoning, Fortis can build it without seeking City approval of zoning changes that the larger ULURP Plan would have required. When Fortis presented the two option 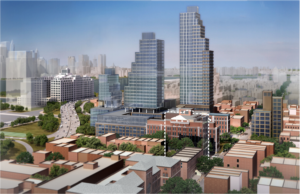 In 2015, Fortis informed the community that the four towers in the AOR Plan included approximately 530 units of market-rate housing, a substantial community facility that it suggested would be a college dormitory, and the NYU Langone Ambulatory Care Center. There would be no affordable housing, public school or retail facilities found in the ULURP Plan. Until Fortis releases its AOR plans, it is not known what its design or exact configuration will be.

In preparation for the start of construction, Fortis will demolish the garage at 352 Hicks Street, the pharmacy/nurses’ residence at 349 Henry Street and the Dog Lab at 112 Pacific Street. Permits for interior demolition of the latter two buildings have already been obtained. The pedestrian bridge over Amity Street is also being removed to convert the Polhemus Building into apartments.

The demolition of the hospital buildings on Atlantic Avenue and Hicks Street has been on-going throughout much of 2016. The new NYU Langone medical facility will have 160,000 square feet served by a 400 person staff, including more than 70 doctors, and a surgical suite for outpatient procedures. Its stand-alone emergency department will serve 75-90 patients daily using 22 beds. Emergency patients requiring more advanced care will be transferred to a hospital with in-patient services.

U.S. Attorney Preet Bharara is continuing to investigate Mayor de Blasio’s role in the sale of Long Island College Hospital to Fortis.  Despite the Mayor’s promise to keep LICH open during his campaign, de Blasio subsequently supported the sale after his election after soliciting contributions to his Campaign for One New York from developers bidding to acquire LICH from SUNY Downstate.

Following the announcement of the investigation, the BHA released a statement that it “is gratified that U.S. Attorney Preet Bharara is investigating potential wrongdoing by Mayor de Blasio in the sale of the Long Island College Hospital.  We would urge the U.S. Attorney’s office to also investigate what the BHA and six other community organizations alleged, in a letter sent to the U.S. Attorney in September 2014, to be serious misconduct and violation of law by SUNY during its acquisition, operation and closing of LICH.  To our knowledge, those allegations were not investigated at that time.”