Mark your calendars! NYC Transit President Andy Byford will discuss possible options for an elevator replacement project at the Clark Street Station on September 16, from 6-8pm. Following a report by the Brooklyn Daily Eagle on April 30th on  the possible closing of the Clark Street subway station for an entire year while its three aging elevators are replaced, the MTA had organized a community meeting, co-sponsored by many of our elected officials.

The BHA is advocating for a phased plan that would allow the station to remain open throughout the project. A complete closure of the station would severely impact the small businesses within the station and on Clark and Henry Street, as well as 2 million riders who use the station annually, particularly those with limited mobility.

A full closure is only one out of the three options which the MTA is considering. No decision has been made the MTA NYCT, nor will any such decision be made until there is an opportunity to get feedback from the public. For this reason, your participation in this upcoming town hall is very important. 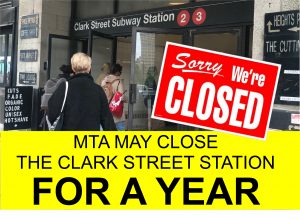 Please join us and make your voice heard!